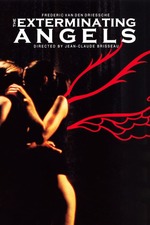 I hate to admit it, but there's something pretty ballsy about making a film like this after being found guilty of sexual harassment. You'd think that one would try and clean up their image to the public in response, but instead, Brisseau doubles down on his horniness with this film. Almost like he's feeding the trolls, if you will, and saying "you know who I am and what I did, so don't act surprised." I can understand how this could turn many people away, but frankly, I'll take this over the faux-provocateur edginess from people like Gaspar Noe or Michael Haneke any day.

One thing that was kind of interesting was the exploration of increased sexual arousal from doing something taboo, which can add to the meta-textual aspects of this film. Kind of like masturbating under the table in a crowded restaurant at the risk of getting caught, there's something titillating about watching a film made by a criminal. Even if I understand the notion to "cancel" this film or Brisseau in general, I can't help but wonder if people are letting their titillation fuel their outrage in an effort to mask their voyeuristic pleasures they received from viewing this film. I'm not judging, of course; my titillation of this film just fueled my fascination towards it. They wink to the left, I wink to the right.

Anyways, I'm not as over the moon about this as I was about Celine, but I dig Brisseau's magic realist style, and honestly, this is as good a film made by a recently (at the time) convicted sexual harasser as one could get, so maybe we shouldn't be wasting angry energy on it. Remember, George W. Bush is still alive, and he's a war criminal.