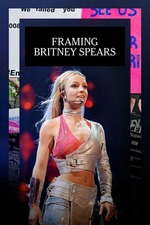 The men of the world were intensely, sexually attracted to a 16-year-old singer. They didn't know how to handle this, and were most likely angry that they couldn't have her, and so they decided to punish her for it. That was my big takeaway from this movie.

In general, this is a very good movie. Although ostensibly about the conservatorship Britney's been under since 2008, it's just as effective as a big-picture retrospective on the disgusting way the media (and many consumers) treated Britney during her time in the spotlight. I'm a couple of years younger than her, and I certainly lacked any understanding of rape culture or misogyny when she was at her peak, so it was somewhat shocking for me to see, for instance, a clip of a middle-aged talk show host ask an underaged Britney Spears — a child, to be clear — to talk about her breasts on television. Wisely, the movie doesn't editorialize any of this; the archival clips are just presented without comment, which makes them all the more effective at driving the point home.

The only complaint I have is that the movie leaves a couple of stones unturned that really should have been turned. My big question at the end was: Where was Britney's mom during all of this? What role, if any, has she played in the conservatorship and Britney's fight for freedom? It's a pretty enormous loose end that isn't discussed or addressed; given that her mom is depicted as loving and responsible in the beginning of the film, the complete omission of her role in the conservatorship was disappointing.

That said, it's still an important, fascinating and at times revolting retrospective on just how horrifically Britney was treated by the media, consumers of pop culture, and the zeitgeist in general. It's also an important reminder that Justin Timberlake is a dick.