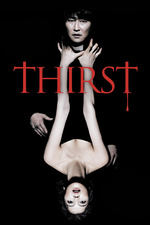 Wowee Park-Chan Wook is great! Though actually, the whole team behind “his” sequence of incredible films should be praised: that is, cinematographer Chung Chung-hoon (and perhaps it is the cinematography, more than anything else, that really makes these movies), the editing team of Kim Sang-bum and Kim Jae-bum, and music supervisor Jo Yeong-wook (whose score for Thirst includes both adaptations of J.S. Bach, AND copious use of panpipes. Be still my beating heart!!).

The colours, the framing, the production design, the camera movements... it's all IMMACULATE, creating a strange, sultry, magical atmosphere that you just hang their suspended in. Some of the imagery – the bandaged priest; the blood spilling, beautifully and horribly, out of the priest's flute – will stay with me for a long time to come.

If you've watched m/any vampire movies, some of the struggles here (try to stay human/e, or revel in your monstrousness, preying on humans with the same lack of conscience that a cat would prey on a mouse?) will be familiar; so too will Thirst's brilliant way of rattling between different generic conventions (horror-romance-erotic film-black comedy-melodrama and back again) if you've watched any of Park Chan-Wook and his team's other work. I must say that on first watch there were times when I found this a bit bewildering, particularly during the middle section when I thought it leaned a bit too hard into American Tragedy-style melodrama and so lost some of the emotional investment it had built up during the first 45 minutes or so. I imagine this won't bother me so much on the rewatch though, as I know what to expect and so can let myself sink into Thirst's strange, sexy, bloody world. Beguiling stuff.