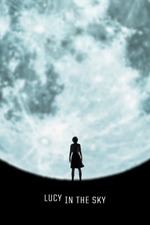 Lucy in the Sky

The easiest thing for a movie to sweep me off my feet is to show me any outer space picture with spacecraft and an astronaut tethered overlooking the Earth, and I go gaga. We’re two shots into Lucy in the Sky, and while the movie demonstrates some borderline competence, I’m not in awe. Something’s a little off about the low resolution of Earth’s atmosphere. In addition, something’s a little off about Natalie Portman’s astronaut — What exactly does she bring to the table for NASA that is actually helpful? I got the sense her Lucy Cola is along for the ride on NASA’s dime (and our dime).

Back on Earth, this astronaut goes through intense feelings of displacement; the boredom of now being earthbound. But the amazing thing about a movie freak like me these days is that it’s only a matter of minutes before a story can lose me altogether.

What I’m left with is the interest of watching Portman play a character she’s not suited for, and doing the best she can with it. It’s not the first time that’s happened. The porcelain skin beauty Portman was in the revenge-fueled western “Jane Got a Gun” and she acquitted herself just fine there, even if I never believed her presence. Outside of “No Strings Attached” (2011) or “Your Highness” (2011), the actress never outwardly embarrasses herself – if I could go back in time to scrub those couple of misses away from existence, on Portman’s behalf, I would.

The cast of this one includes Jon Hamm, Dan Stevens, Zazie Beetz and Ellen Burstyn in a tiny role where she uses more expletives inside two minutes than she used throughout the entire 1970’s. Everybody else stumbles at some point or another over the stilted dialogue. Director Noah Hawley swings for the fences with some visual invention, but the gimmick of constant changing aspect ratios doesn’t radically fill us with additional insight on Lucy’s distortions — it’s just an aggravation to us.

Based loosely on the travails of astronaut Lisa Marie Nawak whom was dismissed from duty in 2007. Yet bizarrely for something that’s trying to be about a specific woman’s sudden aberrant behavior, this movie strictly exists in a vacuum cut-off from anything convincing.