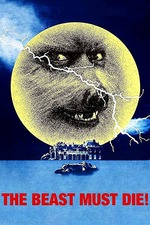 This oddball Amicus production puts a novel spin on both werewolf movies and mansion-bound mysteries, throwing in a fantastic old-timey gimmick on top of it. I've been pumped to see The Beast Must Die for a while, so I'm unhappy to report that the high concept doesn't accompany thrilling results. You've got Peter Cushing, the second Dumbledore, the criminologist from Rocky Horror, Ganja (as in ...& Hess) and some other folks holed up in a gloomy old mansion for the three-night duration of a full moon. Their host is a cocky big game hunter dressed up like famed Blacula hunter Jefferson Twilight at Bondage Night, who's souped up his compound with closed-circuit surveillance cameras, high-tech motion sensors, electrified fences and a chopper, all because he believes one of these folks is a werewolf and, well, the title. Then there's the promised "werewolf break," where the film pauses and a narrator comes on to ask who you think is turning into a large painted-up dog every night. In theory, all of this is great.

In reality, most of the movie's taken up by Calvin Lockhart's obsessed millionaire skulking around and accusing his guests of being a werewolf, over and over again. Lockhart manages to be pretty entertaining despite playing an unlikable asshole with no apparent motivation for his lycanthropic monomania, while everyone else, poor Cushing included, seems to be asleep. We spend a lot of time looking at all the bad-ass, cutting edge equipment this guy has, but the first night, the werewolf easily kills the guy who's running the surveillance, and it both goads Lockhart into blowing up the chopper and kills the pilot the second night. However, all the dithering might be forgiven if the "werewolf break" wasn't bungled so spectacularly. Not only does it come at a random juncture so as not to heighten any tension, but the secret werewolf reveal is a total cheat. Sadly, The Beast Must Die is a wasted opportunity all around.