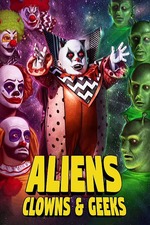 According to my Letterboxd page, I’ve seen just over twenty thousand films. Seeing so many films changes the way you view them, and how you criticize them. The intent of the filmmakers begins to matter more; the purpose of the film, the reason for its inception, how the people behind and in front of the cameras approached the creative process, and its originality.

The 21st century is the golden age of creative outlets, almost anyone can use easily affordable technology to create almost anything. For films, this means a floodgate has been opened that dwarves the VHS revolution of the 1980s. There are so many films released that it would be a full-time job watching all of them. Endless stream of horror flicks made with a shoestring budget, with no real creativity, originality, or care. Films made to make a quick buck, utilizing concepts and tropes that everyone has seen before.

And then comes “Aliens, Clowns and Geeks.” At first glance, it might look to be one of the countless flicks made to with the intent purpose of becoming a ‘cult’ film. It is not. Those films are most often filled with absurdities, but made with cynicism, self-aware self-mockery. They are satires trying to be the real thing. “Aliens, Clowns and Geeks” isn’t made like that. Sure, it’s full of absurdities, borderline Dadaistic in nature, but it’s not making fun of anything, it’s simply fun.
And that’s refreshing.

Made by Richard Elfman, the legendary director of one of the greatest, real, cult films of all time, “The Forbidden Zone,” and it shows that Richard made the film because he wanted to make this film. It’s earnest filmmaking. There are no winks to the camera, there is no ‘we know we’re silly,’ it’s sincere in its silliness. And that’s what I love.

The film tells a simple story of a man who finds that his innards possess a key to the universe. After he births the key, a war arises between reptilianesque and clown-based aliens. You don’t need to know more about the plot.

It stars Bodhi Elfman, Richard’s son, who I always remember from one of my favourite films, “Pirates of Silicon Valley.” The late great Verne Troyer (Mini-Me from the Austin Powers flicks) portrayes a clown alien ruler; George Wendt shows up as a priest and French Stewart is here in his best role as a scientist. The rest of the cast is great and fill their parts well.

In essence, the film is, as previously stated, simply fun. It’s original enough for you to not know what will happen next, which is a big plus when you’ve watched as many films as I. It’s funny in a mixture of old Marx brother films and the films of Stuart Gordon (Re-Animator) and Frank Henenlotter (Basket Case), with a twist of Tim Burton (Richard's brother, Danny Elfman is partly responsible for the music of the film, and there is nothing more Burtonesque than Danny). In the end, it’s a true B-film, and who doesn’t love those?

The world has been a pretty bleak place over the past year, humanity needs to be entertained. I firmly believe that there is a huge audience waiting for a film like “Aliens, Clowns and Geeks” to make them forget about pandemics, brutality, climate and everything else, even for just an hour and a half. It’s not for everyone, nothing is, but if you like to put something different on the screen and just have a good laugh with your friends over it, then this film is for you.