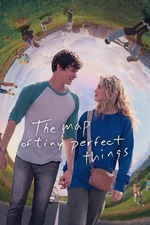 The Map of Tiny Perfect Things

What I liked:
- Great chemistry with Kyle Allen and Kathryn Newton. Their relationship is well developed and has some great emotional payoff by the end of the movie. I believe this movie has great development also with their own individual problems. Newton's character had this surprise twist in the finale that I didn't expect.
- The timely themes about finding joy in the little things are explored with some heartfelt sequences with both of the characters.
- The movie has some fun acknowledgements to other movies in this genre. Mark's conversation with his friend is really funny and refreshing sequence every time it happens.

What I'm mixed about:
- The movie is very familiar.
- I think the final sequence of this film is a bit of a weird spot to conclude. There's a sequence before it that would have been a bit better. I do like the final sequence with the payoff it has from previous scenes, but it was put in the wrong spot.
- The movie sometimes tries to be a bit funnier than it needs to be. There are some chuckles here and then with some sequences not hitting what they intend.

What I disliked:
- The connection of the movies message with the plot hurts this film quite a bit. I love how much this movie explores finding little things and the surprising level of emotion constructed from it. However, these moments become the solution to finding an escape from the loop in a way that I wish didn't exist. A movie like Groundhog day had no need to do something like this which is why I think that conclusion really worked.

The Map of Tiny Perfect Things is a pleasant surprise. Although familiar, this film's themes and the performances from the two leads make this a different experience. When this film focuses on the characters is when this movie really shines. Other times I felt the movie tried a bit too hard to be smart or funny. Still a really enjoyable film and one that I ask people at least give it a try.

The Croods: A New Age

Judas and the Black Messiah