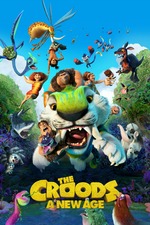 The Croods: A New Age

What I liked
- The movie this time around was far more enjoyable. Most of the jokes had plenty of setup and payoff throughout the whole movie. Dynamics between the characters were far more entertaining as well. Favorite was between Grug and Mr. Betterman.
- The change in perspective with the themes works really well with its story. The first movie did a good job with introducing Guy who had his own ideas. The Bettermens in this movie have different ideas with how to live compared to the Croods. This introduced a conflict that feels developed enough to matter.
- Has a nice change of pace compared to the first film. The first movie has problems with rushing its worldbuilding. This movie slows down and takes its time to develop the characters and introduce the new creatures.

What I'm mixed about:
- The plot of the movie feels very familiar to other movies like it. While I did enjoy my time with this movie, I didn't find myself engaged with the emotion developed with the conflict and its characters.
- Third act has some jokes that don't land as they are intended. The Thunder Sisters joke from the Granny goes a bit too far for my liking.

What I disliked:
- There are multiple ideas that I feel tried to appeal to our time. Especially the window, which can be funny at first but goes on for far longer than it needs to.

- Rewatching the Croods A New Age has solidified how much of a surprise this movie is. The humor still lands upon rewatch and characters are given some great development and dynamics. I still find the plot overly familiar though. If I'm in the mood for an entertaining movie, The Croods A New Age will provide.

I Care a Lot

The Map of Tiny Perfect Things