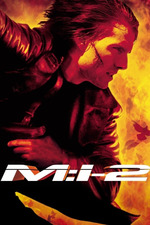 What I liked;
- Tom Cruise dominates in the acting and action. Proves that he is formidable in the action department.
- The action is a major step up compared to the first film. As little as it happens throughout the movie it is stylized and fun to watch. The final act is where the movie really kicks butt.
- Many moments where the movie pays off its plotlines in really cool ways. Again, the face masks are used, but to much greater use. A twist in the final act with one of Ambrose's goons is one such example.

What I'm mixed about:
- The first two acts of this movie pales a bit in comparison to the third act. I do enjoy the first two acts on their own terms though. If there was a bit more action sprinkled through the beginning and middle parts, then it wouldn't have bothered me as much.
- Characters such as Ambrose are fine. I don't find really anyone particularly memorable, though I can appreciate their presence.

What I disliked:
- The movie has many plot contrivances that don't make a whole lot of sense. Some nitpicks of mine grew on the poor use of tension in dire circumstances. One example is a character getting his shirt caught when a bomb is about to go off.
- The movie sometimes overexplains sequences through other characters yet is unnecessary. When Ethan goes to destroy the Chimera, it consistently cuts to our villain talking about what he expects Ethan to do.

- I can see why people wouldnt like this film. The movie has many contrivances or conveniences to add tension to the action sequences which hurts the movies credibility. I can still find quite a bit of enjoyable elements. The action is amazing and made better by Tom Cruise. Definitely some elements that don't work, but I had a good time.