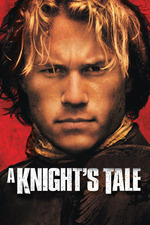 44/100 Bad
A Knights Tale will please many people and many will enjoy it much more than I do. I truly respect and understand but it didn't connect with me the way it should have. It tries many things that you would expect and brings in some elements that I don't think quite worked.

I'll say the hook to this movie was Heath Ledger. He's does a great job in the role and brings the characters courage, charm, and wit. His character is well explored through his relationship with his father, the princess, and all of his crew members. It brings the emotion you would expect, considering they took about every idea you'd expect and put it into the film. I think that's a bit of the issue is because it explores his character in so many ways it feels a bit overstuffed. It shouldn't be that way considering the film is over 2 hours long. I think the villain is fine but there aren't any interesting qualities to his character. Yet again the exploration of Ledgers character takes away from the potential to explore the villain. The film then lacks the stakes of their rivalry till about the end of the film.

The big issue is that it doesn't have a clear tone. The movie tries balancing the underdog story line but also tries adding goofy moments. The music doesn't serve the movie in any right ways in my opinion. They have classic medieval music playing for it to transition into a pop or rock song that becomes too much for me to take seriously. Even a song like We Will Rock You, which I absolutely adore, didn't work. I'll admit that the film can be funny at times. One moment did actually make me laugh out loud. The rest, however, didn't fit the tone or weren't even funny.

Another big issue I had with the movie was its runtime. I still stick to my guts saying that the exploration Ledger's character really worked. There's a few too many plot lines I could have lived without and the main plot with the jousts stretched too thin. The jousts can be really fun to watch but then there's the big plot with the princess, which I think was fine. Then there are many subplots like a man constantly having been stripped of his clothes. There's also a subplot involving delusions and flashbacks that was a bit distracting. The movie is a bit over 2 hours long and feels like a film that should be 30 minutes shorter. The material is stretched too thin and gaps are filled with too many breaks between the main story lines.

The movie can be fun at times and it does have a lot of exploration with ledgers character. Unfortunately, it at times feels stretched too thin to keep me on board with the story. A bit disappointed with this film.