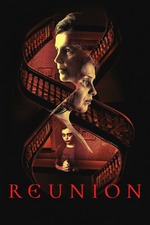 Filmed in Wellington, NZ; & starring Julia Ormond, Jake MaHaffy's feature REUNION seems on the surface a lot like recent Australian film RELIC.
Mother, daughter, large rambling house, strange noises & odd dreams... so far so been done before. REUNION however, is a little more esoteric.
Where as RELIC deals with the looming loss of dementia, and the cycle of maiden, mother & crone; REUNION plays on a family drama level (mother vs. daughter - it's a tale as old as time) as well a supernatural level that will have you shifting uneasily in your seat.
As the young mother to be grapples with the unfamiliar changes her first pregnancy brings to her body & her mind, the pressure of dealing with an impending Academic text deadline & an overbearing mother seems to be manifesting in ways that may make the most hardy of us uncomfortable.
I'm not talking gore - that would be far too out of place in a film this refined, this detailed; I'm talking genuine, wincing discomfort.
Emma Draper perfectly pitches her role as the troubled daughter against a fraught Julia Ormond, who fraying like a piano wire, is downright terrifying.
Special mention must be made of both costume & production design, both of which do exemplary jobs.
It's a savvy trick, using the house dressing to communicate the mental & emotional state of those present, while the costume design both differentiates as well highlights states of mind & shared roles.

Deliciously dark with slow building dread, REUNION is part of a growing movement of horror based around ideas of identity, especially for women.

Anna and the Apocalypse