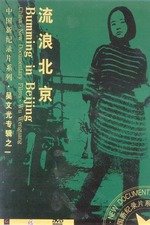 If the State media ‘documents’ of the Mao era intentionally reflected the emphatic nationalism that the CCP built into its post-revolution identity, the independent Chinese documentaries of the post-Mao era reflected a very different national mood: one exuding the fears and anxieties from the living memory of the Cultural Revolution, and eventually, the Tiananmen protests. Wu Wenguang’s Beijing Bastards is often credited as the work that birthed China’s New Independent Documentary movement; it’s about a group of Beijing-based migrant artists, most of whom attended college in Beijing in the 1980s and were born in the 1960s — thus, they came of age during the Cultural Revolution. The film is set in the midst of a crucial period between 1988 and 1989, and while it never mentions Tiananmen explicitly, it makes coded allusions to it.

One title card in the last third of the film simply reads “October 1989,” and it sets in motion a brief but particularly loaded sequence of shots. The first shot fades in on Gao Bo, a freelance photographer, fiddling with a lightbulb that’s dangling from a chord near the ceiling. Gao whistles a tune to himself, and when he finishes with the lightbulb, he immediately switches on his stereo, which plays back the same song he was whistling: “Do It All Over Again,” by pioneering Chinese rocker Cui Jian. Wu’s camera then lingers for awhile on Gao’s face, in close-up, as he sings along to the track (and examines the inside of its cassette case): “I don’t want to leave/I want to exist/I don’t want to live too realistically.” The next shot is of Mou Sen, another artist, rummaging through photos from his time as a theater director. The sequence ends with the most emotional shot in Wu’s whole film: A melodramatic Chinese pop song plays in the background as the camera pans across the interior of a room, eventually framing eccentric painter Zhang Xiaping in a tight close-up. As the camera pushes in closer, Zhang’s face remains largely shielded by her hand and her long black hair. But we hear the sounds of her sobbing.

This sequence seems to allude to an experience of the emotional fallout in the months after the Tiananmen Square Massacre. One clue is obviously the date; these are the first scenes that the film indicates are set in 1989. But another, even bigger one is the song Gao Bo whistles and plays on his stereo. Cui Jian is best known in China for another one of his songs — “Nothing to My Name,” which became an anthem for the Tiananmen Square protesters. Cui himself is a contemporary of the artists in Bumming in Beijing, and as the lyrics to the song in the film suggest, his ethos was very similar to theirs: “I want to exist.” Cutting shrewdly between the three young artists in this sequence — each finding solace through art — Wu in effect repurposes the montage grammar that the State used to present its own ‘objective truth,’ creating a stirring portrait of trauma and resilience in post-Tiananmen China. And he further intensifies his own objective truth in the sequence by using the long-take form favored by many independent documentarians, drawing on a mode of portrayal used by the “direct cinema” movements of the 1960s in America and Europe to give his own representation of a marginalized social class.