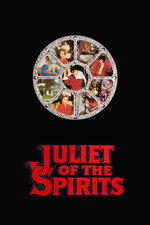 This is one of those films that has grown on me a lot since I first saw it. I initially thought Juliet of the Spirits was a very good film but a step-down in quality compared to the other Fellini films I'd seen. Though now it's one of my favourite films of his. My favourite aspect of Juliet of the Spirits is the beautiful colour photography. All of Fellini's previous films were shot in black and white.

When you watch Juliet of the Spirits its like an explosion of pure colour with the striking costumes, set designs and cinematography. The visuals really jump off the screen and make the film a joy to watch. The film has wonderful performances from Giulietta Masina, Sandra Milo and Valentina Cortese who convey the emotions of their characters perfectly.

I love the Nino Rota soundtrack. Out of all of his film scores, his one for Juliet of the Spirits is perhaps the most dreamy. There is a strong dreamlike quality to the music here that reminded me a lot of Angelo Badalamenti's Twin Peaks score. Rota's score sets the mood perfectly and also has that classic circus quality that Fellini is known for. As a whole, Juliet of the Spirits is a fantastic film that i can't wait to see again