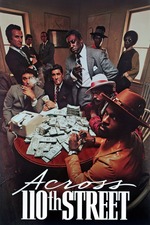 Despite enough concern about its content that the film's director, producer, and casting director met with a range of Black organizations "to help them cast [B]lack actors and to listen to concerns regarding the script and the depiction of the various [B]lack characters," Across 110th Street nevertheless functions within significant, self-imposed restrictions. Among those restriction are the compulsion to have the young, Black cop be righteous and good (see In the Heat of the Night, for example, and take note of how similar Yaphet Kotto's vocal cadence and tone are to the ones Sidney Poitier utilize in that movie), the inevitably tradition in stereotypes, and the racist white cop and the Black one finding a sort of reconciliation by the end, a necessity conformed to here with almost laughable heavy handedness.

Within those restrictions, however, the movie is quite effect, anchored by fantastic performances from both Anthony Quinn (no prizes for guessing which character he plays) and Kotto, whose performance as Lieutenant William Pope earned him a major supporting role in Live and Let Die, and launched him thereafter into some important roles in blaxploitation pictures.*

Based on a novel by Wally Ferris and using familiar beats to illustrate the painfully few options available to Black men and the violence that grows from organized crime, the film doesn't shy away from putting that violence on screen, capturing torture and beatings that are genuinely hard to watch. But it also offers some slightly more nuanced ideas, particularly the way in which it narratively links Anthony Franciosa's sadistic mob underling Nick D'Salvio with Quinn's worn out cop, Captain Frank Mattelli. Both men are resolutely racist, and they're also terribly thin-skinned, exploding into self-righteous attacks when their fears are spoken aloud in their presence. In both cases, it's Doc Johnson (Richard Ward), a Black Harlem crime boss, who calls them out, mocking D'Salvio for his fear that he'll never be more than an "errand boy" for his father-in-law's mob, and repeatedly referencing Mattelli's age. And, in both cases, the men make fools of themselves trying to silence him, thus not only showing everyone in the room that their imagined superiority is just that, but also confirming the fragility of their blustery, white man's confidence.

There's also a wonderful scene in which the enraged, dangerously aggressive D'Salvio angrily tells Doc that "Harlem is ours. we found it, we made it, and we’re gonna keep it." Intentionally or not, has a film ever included a better representation of the colonialist mindset that's so natural to we white folks? Lord.

Needless to say, everything ends terribly for almost everyone, both professionally and otherwise, with many of the main characters being swept away by the buckets of blood and boundless violence that was the focus of so many of the contemporary, negative reviews of the film. The one I can't stop thinking about, though — and one that is quoted everywhere — is from Roger Greenspun, who wrote in the New York Times that the film "... manages at once to be unfair to [B]lacks, vicious towards whites and insulting to anyone who feels that race relations might consist of something better than improvised genocide." It sticks with me because it's so reflective of a white supremacist mindset — the idea that a movie, set in Harlem, in which there are Black people doing bad things is "unfair to [B]lacks," can only exist if the cinematic actions of a few people of a particular race will be taken as representative of that race as a whole. Similarly, notice that Greenspun, in his indignation, frames white people as the victims of the movie — the ones experiencing viciousness, presumably because of the way they're depicted. Never mind that easily the most hateful character in the movie is white, and that most of the sympathetic ones are not.

The review is a great reminder of the world into which films like this one were thrust — and, to be fair, the idea that anything that even hinted at blaxploitation was damaging to Black people in general was not one held by white folks alone. Though, today, Across 110th Street seems conservative in important ways, in 1972 it was immensely challenging to audiences, and the efforts of its makers to consult with a community they were depicting but to which they did not belong to try to improve that depiction must have been immensely unusual. (The film reportedly features the first on-screen credit for a Black stunt coordinator in Hollywood, a job performed by Eddie Smith.)

*If you're interested in the genre at all and haven’t seen it yet, please check out Friday Foster. It's not great, but Kotto and Pam Grier are pure joy to watch together.