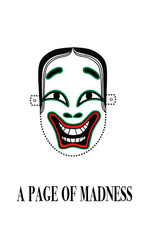 Watched with the Collab.

Without intertitles or the presence of a benshi who would traditionally fill in gaps, and offer their own creative contributions to the image on-screen, the narrative of Teinosuke Kinugasa's A Page of Madness (1926) is, at times, very difficult to follow.* What's not difficult to follow, however, are the emotions of the film. Set inside an asylum for the insane in the Japanese countryside, the film is infused with fear, pain, and confusion — those of the inmates, first and foremost, but also of the janitor whom we often accompany, a man who initially seems untouched by madness.

Cinematic insanity is frightening when we can feel it. There's little horror in looking from the outside at people who are unwell — or, rather, there is horror, but it's either exploitative ("Look, that person is dangerous to you!"), or available only to those with very specific privilege ("Oh, wouldn't it be scary if a mental break ever happened to you, or someone you love?"). To effectively create terror for the audience without either exploiting those in pain, or making assumptions about the identities and experiences of viewers, we must be placed inside the minds of those for whom the world has become unpredictable (unfamiliar, unfriendly). And it is here, in those feelings and experiences, that Kinugasa's work is so effective.

As several writers on the film have noticed, it is profoundly subjective. There is nary a neutral shot in the 80 minutes — in fact, often shots that initially seem neutral are not, as with the first meeting between the janitor and his wife. As we work to interpret their interaction — her prone, him stern above her — the janitor walks into the scene again, far more passive this time, and wearing entirely different clothes. So from whose vision was that first confrontation? In whose mind did that take place? Who should we trust? What is real?

Shaken from reality so early in the film, we never recover our footing. Instead, we spend the entirety of the experience questioning what we see and what we feel.

Is this real? Can we trust it? Is the fear we're experiencing rational, or does it come from the addled minds within the story?

At what point does it no longer matter?

As James Peterson pointed out in his analysis of A Page of Madness, the difficulty of discerning reality from the fantastic in the film is particularly challenging because, despite all of the different editing and cinematic techniques deployed by Kinugasa (Peterson counts seven: superimpositions, distortion of the image with a curved mirror, whip pans, spot lighting, split screens, upside down footage, soft focus), none are consistently associated with fantasy/unreality, so we're without the type of visual markers that are often provided viewers in films that blend objective reality with the deeply subjective.

Though none of the techniques mentioned above would have been new to Japanese audiences — after all, with so many samurai films being made, innovative techniques were constantly being sought in order to tell similar stories in new, exciting ways — their rapid and compounded deployment here would have been decidedly unfamiliar. In other words, the presence of so many different techniques, often feeling as if they're being deployed all at once, only compounds our mental and emotional displacements — not only is nothing predictable, but the tactics that make it so are themselves disorienting.

For all of these reasons, A Page of Madness is deeply troubling, and packs an intense emotional punch. For some critics of the time, however, emotion was not enough — they needed a clear narrative and, without it, the film was a lot of pretentious nonsense. Or, as one particularly irritated critic put it in 1926,

Grim naturalism loses its way and gets into a grand battle with so-called pure film snobbery. Confusion. Confusion. Everything is confused. Impressions go out the window. Just what the hell have I been watching?
Incomprehension.
Chaos.

*Though it has somehow become an accepted truth that Kinugasa refused to allow benshi to take part in the presentation of his film, according to Japanese silent cinema expert Mariann Lewinsky (who has spent more time with primary sources connected to A Page of Madness than maybe anyone else ever), the film was, in fact, finally shown for the first time because of the support of a particularly powerful benshi, with him performing alongside the film.