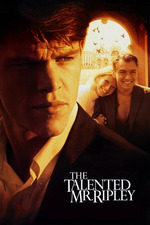 This was an interesting watch, not only because the film is very well done and the story captivating, but because of the way it merged and deviated from Purple Noon. Sometimes so closely that I imagined I'd actually watched this version way back and forgotten. Ultimately it persuaded me to read the original novel, because this adaptation ends in a wildly different way to the Delon movie.

Here, Damon's Ripley seems more psychologically rounded and complex. There's a sense of desperately wanting to belong, for something or someone to cling onto. The initial spark of violence that sets him on his epic scheme is completely unplanned, and he spends the rest of the film simultaneously revelling in his situation and being challenged by it at every turn. Still, there's something missing that meant I was never won over. I kind of wanted him to get caught, as opposed to the common storytelling trick of having you root for the most despicable bad guys on some level.

Narratively it only suffered from familiarity, and that's not really the fault of the film. The score gets a little heavy-handed at times as well. Damon is excellent, as is every actor down the list. A fun moment - at about an hour in Paltrow gives one of the best 'surprised' takes I've ever seen on screen. I also didn't realise Blanchett was in it so that was a nice surprise for me.