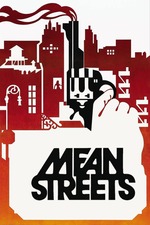 The staple ideas Scorsese would continue to explore for the rest of his career are present here and they are rough as guts. This film is far more art-house than any of his latter entries and possible his most inaccessible.

If you are a fan of Scorsese's work and want to see the evolution of a master, you will enjoy this deeply, however if you are just looking for a regular mob flick you will be very bored. I really enjoyed the lack of plot, as the characters and performances were so rich and vibrant I loved just hanging out with them.

The underexposed, handheld cinematography is gritty and gorgeous, featuring rehearsels of several iconic shots later to see fame in Taxi Driver and Goodfellas. The way Little Italy is shot and the way the characters speak builds a rich atmosphere and showcases an authentic world to immerse the viewer.

The rock n roll soundtrack is awesome. The pace of the edit is far too sluggish.