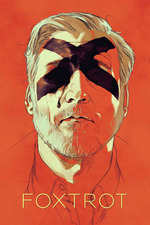 I can see why people seem to like this film, but it just wasn’t my cup of tea. Foxtrot focused on characters rather than the plot surrounding them, which I don’t normally have an issue with, but the story doesn’t seem developed enough. Really, my main problem with this film was that it was so boring. By god, I almost fell asleep in the theater.

Foxtrot did some things well, though. The acting was phenomenal & raw, and the camera work was impressive, but these positives, along with some really beautiful shots, still couldn’t save the film for me.

Added to ‘2017 Ranked’ and ‘Movies seen with MoviePass - Ranked’