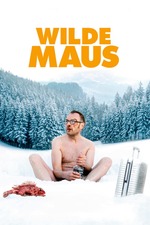 “I am an authority.”

“Wilde Maus” (Wild Mouse) is the name of a roller coaster touring the fairs in many parts of Germany. No looping or other aspects which have become more or less prerequisites for the construction of any attraction in theme parks anywhere in the world, the attraction is perhaps one of the more traditional ones one might find on a large fair, a harmless, fast tracks of ups and downs before you head to the haunted house next or have some popcorn.

Wilde Maus is also the title of the first film directed and written by Austrian comedian and actor Josef Hader who is possibly best known for his appearances in comedy shows on German and Austrian television as well as his performance as Simon Brenner, an investigator and protagonist in the crime novels by Wolf Haas. Hader admits how it had been risky and almost too egoistic to write, direct and star in the film, but inevitable in the end considering he would have been something of a “co-director” had he given the project to someone other than him. The team he eventually worked with supported him, especially his two cinematographers Xiaosu Han and Andreas Thalhammer whose help he appreciated immensely since they brought much technical knowledge to the production. In his typical odd way Hader defines the experience of directing as “doing very little and everything is there” if you let yourself be guided by a mixture of plan and improvisation, the latter of which especially applied when it came to his cast.

As a result Wilde Maus is very much like the roller coaster, which also is one of the main sets of the film, about the ups and downs in life, preferably the latter. It is a tale about the beautiful absurdity of losing mixed with black humor and deadpan moments.

Georg (Josef Hader) is a respected music critic for a Viennese newspaper who has made a comfortable living with his wife Johanna (Pia Hierzegger) in the suburban areas of the Austrian capital. His idyll falls apart when his editor (Jörg Hartmann) suddenly fires him claiming Georg has no readers to speak of anymore for his often bad-tempered reviews and articles as well as the paper being unable to afford him anymore. Outraged he keeps the incident a secret to his wife who dreams of having a child with him spending his days looking for a new job and playing childish pranks on his editor who he blames for his misery.

With the help of an old friend he knows from school named Erich (Georg Friedrich), a small-time criminal going from job to job besides doing some illegal activities on the side, he invests in a run-down roller coaster attempting to find new motivation in life. But with his wife slowly suspecting something is wrong with him Georg realizes how his thirst for taking revenge has increased unwilling to rest unless he does something about it.

In one of the final arguments with his wife Georg confesses feeling like an island with no connection to the main land and no one able to help him in any way. Johanna, in one of the rare occasions of speaking and thinking being on the same level, looks at the rather pathetic man-child sitting in front of her and finally tells him to just shut up. Eventually he does, another defeat in the eyes of the man who has suffered so much through the course of the film, much of it due to his own ego, his own silence and above all his inability to think about others. Unlike Will, the adult protagonist in Nick Hornby's About a Boy, another man-child and another man referring to himself as an island, there is very little pity left for Georg given his behavior up to this point which has been borderline anti-social and even criminal at several occasions. Still, with the uncanny ability to give his characters, despite their antics and oddities, a deep sense of humanity Hader shows Georg as one character graceful in his failures. In that way he might be more in line with Jerry Lundegaard, the unlucky car salesman in Fargo by the Coen Brothers, or Osborne Cox from Burn After Reading unable to see the emotional and physical wreckage he leaves behind because he will not admit failure.

There is nothing bittersweet about the fate of the characters in Wild Maus. The deadpan delivery of truths, mostly spoken out loud or visible in the changing expression of others, carries an ironic authenticity, an awareness of the absurdity of the situation, even if the characters themselves are unaware of it exaggerating their failure to a story of epic proportions. Especially Georg, with his predilection for classical music and opera, can not get enough of a soundtrack consisting of Beethoven, Bach and Mozart, only the finest musicians writing the score to his life-opera full of bis gestures, self-righteous pranks turning into slapstick scenes, for example when Georg tries to destroy the cameras surrounding his editor's house unaware of the ones already filming him doing so. Even the roller coaster he buys with his new-found friend Erich has to feature the music to his life, one which has been on rails most of the time and with no surprises other than the change in the lunch menu of his favorite restaurants or the programs of the theaters he goes to. The tunes of these composers can perhaps disguise the cheap thrills and inevitable end of the ride, but then again you can always go for another round.

Wilde Maus is a film filled with absurd situations, wonderfully written and acted by the cast of the film creating an existential comedy of one trying to write his own opera, his own Greek tragedy unable to accept how failure is essential to life, a chance to start again. It is a film which nearly always finds the right comic timing and in the end a presentation of the enormous talent that is Josef Hader.