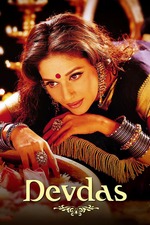 By the point this film reached its intermission I was confused, emotionally affected and riled by the choices and decisions which the characters have made and suffered through. I gave this a 7/10 and went to sleep.

The next day I finished this film and I have to say, this is one of the top 5 Indian films ever made. The work put into the acting performances (career highlights from Shahrukh Khan and Aishwarya Rai); the intricacies and beauty of the sets, costumes and make-up; the brilliance of the poetic screenplay; in-fact every single aspect of this film is perfectly crafted. This is a masterwork of cinema and the bonus is that it has some of the best Bollywood songs and choreography ever.

It appears that Dev was influenced by the West, and in this iteration of Devdas, perhaps Bansali is suggesting that when one is heavily influenced by Westerners, it is a recipe for disaster, more specifically in a traditional household. Dev is the product of a Western idoliser and I infer from the message (of this version of Devdas) that this is a contributing reason for him being an alcoholic and off-the-rails.

The first half is definitely controversial; why is it excusable for Dev to hit Paro? Paro comes across as a victim in this situation however, we do support her, root for her and want the best for her. This story contains very complex characters and relationships, so these dynamics need to be analysed and understood carefully. Nobody is accepting Dev's abuse, but we must develop a comprehension for why Paro puts up with it. Dev is self-destructive, Paro is his saviour. Their love is a strange love, built on years of companionship, separation, yearning and excitement. Once this is all taken away from them, in the second half of the film, we realise that this is the only thing that both lovers ever needed or wanted. They are totally unhappy and lifeless separated and a sense of pity develops for both of them apart.

The best takeaways of this film are that the women are powerful and expose the hypocrisies of men and classism (especially the landlords). The love that Dev and Paro share is unforgettable and is something that one would crave after seeing this film.