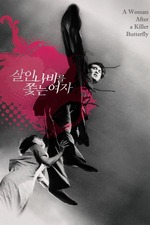 Woman Chasing the Butterfly of Death (1978) is just as insane as the title would suggest, a surreal mixture of self-serious nihilism and campy visuals where a character can have a deep philosophical conversation about the meaning of death with a hokey prop skeleton on strings. That doesn't mean that the film itself can't be taken seriously, just that the lack of formalism and coherent narrative might be initially off-putting to some viewers.

The tale follows a morose young man named Kim Young-gul (Nam Koong) who at the beginning of the film narrowly avoids being poisoned by a girl he meets while frolicking in the park catching butterflies. Apparently, she was planning on committing suicide by drinking poisoned juice and decides that she doesn't want to die alone and gives poor Young-gul some of her deadly drink. She dies, but Young-gul is rushed to the hospital and he survives. Thus begins his obsession with death and dying.

Young-gul's story is divided into three sections and all of them are defined by a woman he becomes entangled with either by circumstance or romantically. There is suicide gal, then a 2000-year-old woman he finds in a cave that inexplicably want to eat his liver but settles for having sex with him in front of a rice cracker machine, and lastly, the daughter of an archaeologist. All three of these women are chasing Young-gul but he is more interested in trying to kill himself than with making love. Every night he sits alone in his house eating instant ramen and staring at a noose he has hung from the ceiling. His obsession with death mirrors the women's obsession with sex.

Although the first two-thirds of the film are straightforward (well, comparatively anyway) the last third goes off the rails hilariously and all semblance of lucidity goes out the window. The visuals become abstract, character motives vanish, heads are separated from their bodies, and the butterfly metaphor becomes literal culminating in one of the craziest endings I have ever seen.

Director Kim Ki-young is most well known for his 1960 film The Housemaid, which is considered one of South Korea's greatest films and has a Criterion release. Woman Chasing the Butterfly of Death was made under oppressive government conditions and like many films made under similar circumstances, it's easier to get things through the censors if the material is abstract. If one reads the film through that lens it becomes more of an existentialist art house piece than an incoherent exercise. Either way, it's worth checking out just to see the limits that cinema can be taken to.