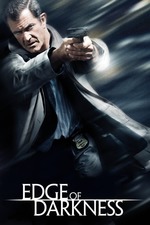 Director Martin Campbell (CASINO ROYALE) boldly remade his 1985 BBC miniseries EDGE OF DARKNESS as an engrossing crime drama starring a leathery Mel Gibson as a Boston police detective whose investigation into the brutal shotgun murder of his daughter (Bojana Novakovic) pits him against a powerful corporation illegally manufacturing nuclear weapons with foreign materials. Ray Winston's mysterious company fixer, initially brought in to cover up the murder, becomes an unexpected ally to Gibson's character. Though predictable at times, Campbell's direction keeps the action tight and moving, but EDGE isn't a mindless action-fest, and if that's what you're expecting, you'll be disappointed. The investigation is handled well, allowing Gibson to do some actual detective work for the first two acts that gives him enough of the puzzle pieces to connect the corporation's sinister CEO (Danny Huston) to his daughter's murder. The movie does contain a fair amount of action, all staged expertly, but it's the grounded performances by Gibson, Winstone, Huston, etc., that keep EDGE from going off the rails in the finale, when justice is dispensed with nasty violence and a downer of an ending becomes strangely uplifting. This is a good, solid adult thriller, and nothing more. Pure Hollywood craft and professionalism, nowadays a dying art form.