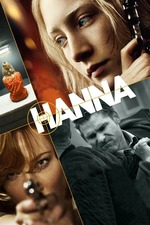 There are few action films at all which have been handled with as much skill as Hanna, not to mention in the last couple of years. Director Joe Wright somehow manages to have complete control over the presentation of action, giving us the excitement of the violence while simultaneously make certain we see every move made. It is a controlled and thoughtfully executed action film, which also happens to be quite bad-ass. This is a combination rarely come across. Including the steady directorial hand, this is all thanks to a group of talented and dedicated people, both on and off-screen.

Hanna (Saoirse Ronan) has been raised by her father, who she calls Erik (Eric Bana), hiding in the remote woods of Finland. He is an ex-CIA agent and has spent her entire childhood teaching her practical things he knows from years working for the government. She is able to hunt and survive, but also able to fight and kill when necessary. The years also developed her brain far beyond that of a child, able to speak many languages and regurgitate countless information gathered in books over the years. Soon it becomes clear that Hanna’s whole childhood was spent being trained as the perfect assassin, in order to kill one intelligence operative (Cate Blanchett); the woman responsible for her mother’s death.

Joe Wright brought Ronan her first Academy Award-nominated role in Atonement, and he brings her back to full form in this latest venture. This is a welcome redemption for Peter Jackson’s Lovely Bones, a film more unpleasant than impressive. Bana is also at his best. Wright seems to have made the long tracking shots his signature, and Hanna has one which is particularly impressive. Erik walks off of a bus and across a street and into a subway station, where he is met with a group of men and a fight. This sequence has no dialogue but we are able to see in Bana’s face the exact moment when he knows that he has been followed.