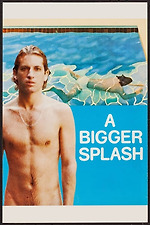 Something that appears to have taken shape in the editing suite, with ‘we’ll fix it in post’ perhaps never truer.

Being an assemblage of random yet contrived meetings and contrived yet random conversations provides a series of postcards of sorts - Polaroids more acutely - but when Hockney isn’t mooching about town he’s vaguely regretting losing a boyfriend. And that’s about it. Dot around that taking showers and baths, there’s not much of interest although you do get to see his technique (artistic not ablutionary) in tracing enlarged photographs before filling in the gaps with paint.

I suppose these things hang on interest in the milieu, but apart from seeing how pre-plasticised North Kensington actually looked when worth living in, there’s not a lot to be gained from these awkwardly gauche chats and disrobings.

That it isn’t clear who some of the ‘cast’ are - possibly doppelgängers at certain points - makes for a potential first: the documentary as thriller, what with the dramatic music and drama out of nothing. but even this eludes this sphinx-like pry into things best left private.

No Love for Johnnie