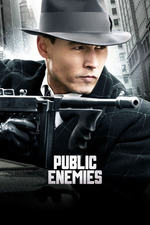 I had high expectations but I’m honestly disappointed. Somewhere in this movie there’s a great piece of crime cinema. I was ready to give this a high score and parade it around as a favorite despite the divided reception. Boy I was wrong, and the fact I didn’t throw four stars on this is so frustrating.

I liked Public Enemies. I enjoyed a lot of it. I love the cast. I like Michael Mann. I love the costumes. I love prison breaks and bank robberies and shootouts and this Depression-era gangster story of John Dillinger. There’s so much style, and I’m typically a sucker for it in spite of lacking depth. This entire movie was essentially made for me, but the entire movie—I’m sad to admit, isn’t great. Damn it.

I might like this more on a rewatch because there’s so much stuff throughout the movie that my heart should just be feasting on with complete disregard for any flaws. Right now, however, I find Public Enemies to be a surface-level series of crime that squanders infinite amounts of potential.
To start off, I want to talk about Michael Mann. As much as I love Heat, it being one of the greatest films ever made in my opinion, I can’t get around Mann’s style in this picture. Most auteur films are immersive in their craft and use images that feel organic to their worlds. With Public Enemies on the other hand I feel the camera in the room. It’s frizzy and sloppy. Depending on the spots of the film the cinematography either looks unique and gritty, or it just takes me right out of the movie. It’s just not for me, and I’d be lying if I said that I wouldn’t prefer for the film to have been shot differently like, let’s say, the show Peaky Blinders, or shot differently like that of another crime director.

My problems extended to the stars on screen, which is really surprising to me. Johnny Depp. Christian Bale. Marion Cotillard. With this epic trio I assumed banger performances throughout but weirdly I wasn’t impressed. None of them are bad, as all three keep me motivated to stick with the film, but I never watch any of them and think they’re the only one’s who could play these roles. Even with Bale he slaps on an accent but isn’t given much to really work with at all. The material isn’t there for these actors. Cotillard’s character is simplified to a damsel tagging along with Dillinger. The script tries to add depth to Billie with her character doubting Dillinger’s ability to evade the bureau forever but it fails to do so. She doesn’t feel necessary or independent as a character. I’m not as enticed with Melvin’s chase for Dillinger either. I don’t feel any rivalry or bitterness between the two that would’ve given the film more meat to work with. The film is razor-thin.

There are a collection of great moments and again the entire aesthetic build of the film is so catered to me, but I wish Public Enemies had been more. It gets an automatic like for the costumes and the machine guns of the era though. I love that shit.

Sidenote: This is my 600th review.