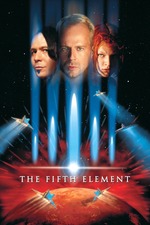 The Fifth Element is ostensibly one of the goofiest apocalyptic films about the impending doom of environmental failure, the planet's future out of whack when humans lose track of the "four elements" needed to save it. Earth, water, air, fire, all that jazz we're so familiar with considering we're a generation grown up on Nintendo JRPGs, and by losing track of these elements in the 20th-century humanity has fucked its future self for total annihilation. Thanks, boomers.

Anyways, turns out there is hope out there, but the problem is that some evil bastard who's the manifestation of corporate greed doesn't give a shit because he can just live out in space. Here is where I slyly plug in the notion that privatized space travel means space travel for the wealthy 1%, and when our planet burns up to a crisp because we return to our unsustainable habits in a post-COVID19 world you can be sure that people like Musk and Zuck will be the first to fly off while the rest of us duke it out in some Mad Max-esque hellscape.

Huh, well that could've been subtler. Anyways, everyman Bruce Willis doesn't like this because he's the embodiment of the proletariat spirit and he's really fucking horny for a mute alien redhead chick who literally fell out of the sky and into his lap. Somehow this all leads to them gathering up these elements before realizing that *gasp* she is the fifth element needed to save the earth! But her experiences on this planet kinda sucked which makes sense because this is like the year 2263 so just imagine how much rent costs (like if that doesn't depress you then nothing will) so she refuses until Bruce kisses her and she realizes humanity is beautiful or something and then *gasp* I guess you could say that the fifth element was love all along!

Then they bang in some kind of futuristic tanning bed where we hear Bruce Willis moan as he gets his sweaty claps on. The end. Oh wait, I guess we lost track of the environmentalist message somewhere. Uh.. fuck Bezos!