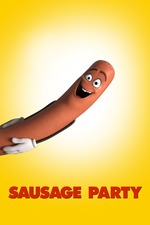 I'm a sucker for a good raunchy comedy, but I was expecting more from "Sausage Party".

Here is a case where all the pre-release hubbub over what a fearlessly filthy great time this is for those not easily offended simply created too-high expectations. Maybe I'm just more demented than the average moviegoer, but I didn't find much about "Sausage Party" all that shocking. There are a few scenes that really go for it and there is some clever commentary on religion and ethnocentric politics that puts it a step ahead of other stoner and/or sex comedies (plus, you know, the cartoon food thing); but mostly, in a post-"South Park" and "Team America" world, its satire - and the idea of using cartoons to push it, and the boundaries of good taste - feels somewhat perfunctory and not up to the high standards set by Matt and Trey and Co. The orgy scene at the end is a true jaw-on-the-floor gut-buster though. I would have preferred more of that brazen insanity throughout the film.

"Sausage Party" is fitfully funny though. The voice casting is inspired, which foods represent various cultures and races and their names and physical traits are clever and thoroughly un-PC, and there is some genuine commentary running through the shenanigans that, even if you fundamentally disagree with it, is at least interesting and far more ambitious than we'd have any right to expect from what is being marketed as "the food-fucking cartoon". I just wish it either went further or hadn't gotten so many reviews like this one from Globe and Mail: "It is, without a doubt, the most delirious movie to come out of a major studio in decades, perhaps ever". Not only is that wildly inaccurate, but also that critic, Barry Hertz, obviously never saw "Team America".