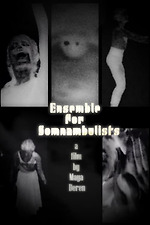 Unplanned, my last writing was also about an experimental short film. Something that I'll probably continue doing, writing small things about short films, due my film watching activity has been reduced by college and this is what time allows me. A little sad and funny, because the will of writing long pieces about films started together with University, but the best part it's that's the short time I have for watching films it's allowing me to rediscover films like this unconcluded Maya Deren film, but no less influential, for filmmakers like Phillipe Grandrirux: White epilepsy (2012), a film about bodies in a dark space and the negative sequence at La vie Nouvelle, 2002, that I think I enjoyed more with this re-watch. Proceed to let some thoughts I had after finishing.

Maya Deren's exploration of dance with inverted color in a black sky, works great. A black and white small, oniric and influential film works well (and much more with some musical companion) for being a nor concluded film. Almost a month (?) ago I started to spend more time and enjoy more watching the clouds and sky at night, this small film it's a pretty good recreation of how it feels. I would rather it to be longer, and probably with more "starry lights", but it was beautiful. Well done Maya.
Watch it with DeVotchka How it ends.

Now you've seen his face. And you know that there's a place. In the Sun. For all that you've done. For you and your children. No longer shall you need. You always wanted to believe. Just ask and you'll receive. Beyond your wildest dreams