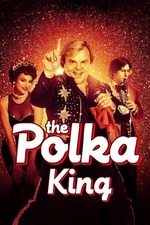 Maybe it's the slew of bad movies that proceeded it, but I found this to be far more enjoyable than its reputation would suggest. Jack Black's performance is borderline offensive caricature, so your mileage may vary depending on how tolerable you find terrible Polish accents and broken English played for laughs, but the actor's natural charisma and exuberant nature make him a good fit for the part. Formulaic structure and plotting make this hard to recommend above any other musician-focused biopic, but it's the story's eccentricities that make a viewing worthwhile - particularly any scene that involves Jan interacting with his geriatric fanbase/investors/victims or his delusional espousing of American exceptionalism. Jacki Weaver's a delight and Jenny Slate is typically wonderful, whereas Jason Schwartzman appears to be on autopilot (save a delightfully ridiculous scene in which his character shares a desire for a new stage name, with the moment given the gravitas of a Born-Again baptism). I've seen better, but won't be surprised if this ranks high in the final tally.