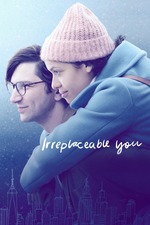 Instead of watching what I'm sure was a painful Oscars ceremony, I watched this. Honestly not sure which would have resulted in less viewing displeasure, but at least this wasn't 4+ hours long.

Like a tearjerker and rom-com were Frankenstein-ed together, with mismatching parts forcefully sewn into a lumbering, bizarre mess of of a film. Manages to maintain some emotional resonance despite itself, so I guess the simile works on that level as well. Messiness and confusion that impending death brings could explain SOME of the nutso internal logic these characters operate with, but I draw the line at "dying gf tries to find bae new wife before sluts get to him." What's most befuddling is the movie spends so much time audibly recognizing the unbelievability of its entire conceit, yet expects that to somehow function as a full and proper explanation. Mbatha-Raw clearly has more talent than her Netflix filmography would suggest, so let's hope this and Cloverfield Paradox were just an unfortunate one-two punch of poorly-chosen projects, rather than a harbinger of what's to come.