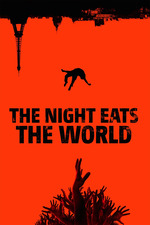 The Night Eats the World

This is closer to the Twilight Zone’s “Time Enough At Last” than the average zombie movie and I really dig that about it. The films central character is a recluse musician who actively avoids a party to fall asleep alone within the same building (sound familiar, Randy?). As he awakes, he realizes everyone at the party’s been slaughtered yet he remains untouched, free to roam the building alone.

A minimalist, moody and meditative film about loneliness with sparse zombie action scenes throughout. Sam, the main character, ends up coming across a drum set early in the film and drums along to a punk record while looking out amongst a herd of zombies/infected/whatever that hear his music but are unable to make their way inside. There’s more drumming throughout and a few other musical scenes that really did it for me.

Oh, and Denis Lavant is in this too as a chained up zombie in Sams apartment that he hangs out with.

The House That Jack Built