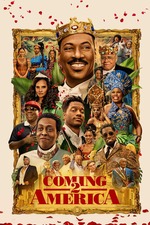 HOLY SHITT. WHAAATT. I didn't think it'd be this bad. Each time Eddie Murphy appears to make a career comeback (Dolemite), the laws of child support require he put out a giant Stanley Steamer shit the next year. From the same director, no less.

Where do I begin? The screenplay sounds like it was written by a woke college professor. Imagine a Disney Channel staff writer doing open mic. That's the level of humor we're dealing with. The characters lack any of the warmth or charm of the original. The jokes are horribly written and performed. Writing comedy is hard; writing a good comedy film is even harder. The first Coming to America is a film that succeeded because of its simple story, genuine characters, and impeccable timing.

Coming 2 America, with all its callbacks and cameos, is a soulless, dreadful slog. Eddie Murphy is practically a vegetable, likely stoned out of his gills. The supporting cast fares no better. Leslie Jones should've been a giant red flag. Though she is not the reason for the film's failure, she is a loudmouthed, talentless wonder who essentially turns the film into one bad rape joke.

If you had told me Eddie Murphy would've gone from Pluto Nash, to getting raped by Leslie Jones and having her forced pregnancy be the central plot of the Coming to America sequel, I would have campaigned for Pluto Nash 2.

The only reason this gets a star (it doesn't even deserve it), is the costumes and I guess maybe you wanna see if Tracy Morgan is alright. The rest is garbage. Amazon, Eddie and everyone involved ought to be ashamed of themselves.