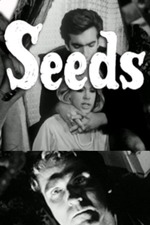 In Theodore Roszak's novel Flicker, a small group of hardcore cinephiles and one poor date who happened to be along for the ride watch a newly-unearthed film by the mysterious director Max Castle. It is described as a black and white nightmare, not overtly horror-themed but oppressive, bleak, and disturbing. When discussing the film afterward, the young woman whose primary interests lie outside cinema flatly states that the film was "enough to put you off sex for life."

Vinegar Syndrome's restoration of Andy Milligan's original cut of Seeds is the closest thing I've ever seen to matching that description. Milligan's films are impossible to mistake for anyone else's work, and his obsessions remained consistent whether the film was a genre period piece, a contemporary "kitchen sink" drama, or whatever the hell Monstrosity is supposed to be. But before now, the purest hit of uncut Milligan we've had was Nightbirds (also just recently released on home video), which stripped everything down to the bone with a minimal cast and locations and presented a battle of wills between a domineering young woman and a weak younger man.

Originally released as Seeds of Sin in a butchered version with totally unrelated sex scenes cut into it, Milligan's original cut of Seeds is maybe the ultimate example of his obsessions and aesthetic. In addition to his trademark "swirl camera" (which makes it feel like even the camera can't stand to watch what's happening), the unstable image gives the impression that celluloid itself is fighting against the interpersonal horrors Milligan is trying to force onto the audience. Without those lengthy "sex" scenes to break up the action, Seeds feels like a claustrophobic no-budget precursor to Zulawski's Possession--it's all merciless sniping, inexplicable genre trappings, and shrieking rage. It's a harrowing, exhausting viewing experience, and it's no wonder the film's original distributors refused to release the film as Milligan delivered it. The world wasn't ready, and it very well may still not be.

Vinegar Syndrome's new Blu-ray/DVD of Seeds is easily one of the most important cult film home video releases of 2017. In addition to Milligan's original cut, the disc includes great new transfers of Seeds of Sin and Milligan's excellent first short film "Vapors." Other features include interviews with Seeds screenwriter Hal Borske and actor Gerald Jacuzzo (lead actor in "Vapors"), and a lengthy Q&A with the two men and Patricia Dillon (who starred in Seeds) from earlier this year after a screening of the two films at New York's Quad Cinema. It's amazing to see Seeds restored to Milligan's original vision, bleak and horrifying as it is. Any serious student of "grindhouse" cinema needs to have this in their home video library.