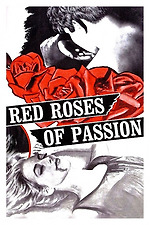 Carla (Patricia McNaire) is tired of her prudish aunt and cousin cramping her style when she brings men home. A friend takes her to meet Martha (Helena Clayton), a fortune teller who runs an all-female cult that worships "the spirit of Pan" out of the back room of her storefront. Martha suggests a way for Carla to put Tracey (Laura London) and Julie (Bella Donna) in their place, and at first Carla is pleased with the results. Her aunt and cousin are suddenly changed into nymphomaniacs addicted to the touch of both men and the mysterious roses that are regularly delivered to their home, but soon the situation spirals out of control. Carla wants to take back the damage she's done, but is it too late?

Red Roses of Passion is a dark occult-tinged sexploitation film from legendary filmmaker Joe Sarno. Vinegar Syndrome just released a limited edition Blu-ray of the film and it looks absolutely stunning, restored in 2k from the original 35mm camera negative. Like Sarno's other black and white features, this one uses a noir-inspired chiaroscuro look to maximum advantage: it both obscures the threadbare set decoration and gives darker scenes an extra edge of mystery and menace. This is one of my favorite Sarno films that I've seen so far (which admittedly is not nearly enough--the man had an admirable work ethic!), and there's no better way to see it than the new Blu-ray.