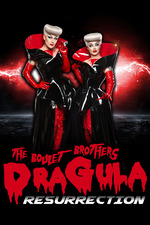 I decided to make room for this reality TV competition + documentary + short form spooky performance art showcase on my Hooptober list because I’m thrilled Dragula is at long last inching into pop culture’s spotlight at large, from humble beginnings as an extremely low budget YouTube series to landing on Netflix and scoring this Shudder exclusive special.  I’ve been a fan of drag competition programs since 2013, and while (for better or for worse) RuPaul’s Drag Race is the gold standard, The Boulet Brothers’ Dragula is both Drag Race’s evil twin, yet also in a lane all its own. Its three tenets, after all, are FILTH, HORROR, GLAMOR - and in addition to purposely nasty and subversive themes and challenges, Dragula invites drag artists of all identities to participate, a fact to be proud of considering that trans, cisgender female, non-binary, and AFAB drag artists don’t get as much attention as cisgender male ones do.

It was such a delight to see these seven familiar faces again. Shot in their own homes and backyards from Arizona, Florida, California, North Carolina and elsewhere with a skeleton crew, these former Dragula competitors all make strong cases as to why they should win the cash prize and be given a chance to participate on the next season. They directly address the pandemic and the resurgence of Black Lives Matter protests; they wade into rivers and crawl through fields; they spit literal fire, drool blood and writhe in maggots. The Boulets themselves, our hostesses, quietly walk through a shutdown New Orleans downtown. This is 2020 in all its filth, horror, and glamor. I can’t wait for season four!

Congrats to the winner of the special. That end credits scene.......interesting.......