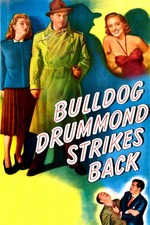 Uses the same title as another Bulldog Drummond film from the American branch of the franchise, but the plots are not related. That's the second time in '47 they've reused a title from a previous Drummond film from the 1930s without it being related. I guess these were titles trademarked to the the series, and they just decided to reuse them.

While I haven't been too high on Bulldog Drummond films since Ronald Coleman jumped off, but I liked this one. Clearly a B-production, but the chemistry between Ron Randell and the other characters worked well for an amusing mystery where they had to find which of the two Ellen Curtiss was the real one to the inheritance. Was actually a little bit clever.