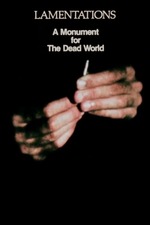 in terms of sheer ambition, breadth, and progressiveness in every possible direction (particularly of course formally, but in other areas as well), Lamentations: A Monument for the Dead World is unmatched. it takes all of the most interesting elements of the great structuralist films (which posited what made narrative films have a narrative), synthesizes them with the aesthetic push of mekas, the rhythm of beavers, and the determination of gance. it's about as dense and inscrutable as Histoire(s) du cinema, but where that project faltered was that its scope seemed too large and the execution was somewhat inorganic. in Lamentations, there is a clear focus (that of the struggle between logical reasoning and faith), yet this thesis is able to stem off into wild directions (such as the conclusion of part 1, using soviet era montage, a brakhage-inspired sex scene, all to conclude with how the formation of language becomes the perfect harmony of these two conflicting ideologies). this scene in question is quite possibly the greatest in cinema. and despite the clear nuance and beauty of it, part 2 quickly tears that optimism down as we learn to live in this incomplete world. there is no film out there like this.