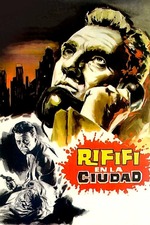 I was really hoping this would be an unheralded masterpiece, it reportedly being the Jess Franco movie Orson Welles saw that led him to hire Franco to direct second unit photography on CHIMES AT MIDNIGHT. It's not a masterpiece, but it certainly looks great, especially in what is so clearly Franco's passion, the musical numbers. While the main story is a fairly standard one about a detective willing to risk career and life in order to bring down a crooked politician, a simultaneous plot is about a vengeful lover taking giallo-like black-gloved-switchblade-stabbing revenge on the thugs that killed her boyfriend. Her storyline is marked with the first appearance of dreamy voice over on top of poetic imagery in Franco's body of work. Pure speculation, but I feel like Franco was also more interested in this aspect of the story than the generic crime drama.

Some technical difficulties marred the viewing experience of this, the first ever back to back consecutive weeks meeting of the mostly random Central Austin chapter of Francophiles: The Jess Franco Appreciation Society and Junk Food Enthusiast Meetup (JFASJFEM). While we waited for Nacho (the Spanish emigrant member) to re-thread the print he smuggled out of fascist Spain in a barrel of bacalao, we got to talking about just how impressive it is that Uncle Jess directed over 200 movies in his lifetime. We challenged each other to name one single thing in our life that we've done more than 200 times, and found ourselves unable to. The closest anyone came was senior member Lars Nilsen who claims to have showered exactly 187 times in his 63 years. I'm not comfortable calling someone I respect so much a liar, but something's fishy here and it's not the print that traveled across the Atlantic under 50 pounds of salted cod.