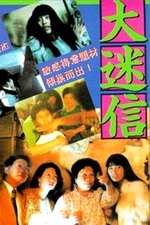 This "documentary" about superstition and the supernatural in and around Hong Kong does not really NEED to be watched even once, much less three times, as I confess I now have. Though near-incomprehensible at times due to poorly translated subtitles, sadly - even some of the comprehensible segments are rather exasperatingly more likely to inspire yawns than wonder. That said, the film was evidently popular enough in Hong Kong to inspire two sequels, and it was interesting enough to cause me to watch it over and over and over in order to be sure I was properly grasping everything, so... let me kill many more hours of my life (and one or two minutes of yours) with an attempted overview of this film... with a focus on the absurd and the ridiculous.. as well as the mundane.

The documentary opens with a discussion of various appearances in Hong Kong of "Fox Goblins," ultimately leading to footage revealing a knotty tree that vaguely looks like a Fox at it's base ("Fox Goblins," of course, are better known to fans of Hong Kong cinema as "Fox Spirits"). We are told that the residents of a building facing this tree are mysteriously all single (one who had a spouse upon moving in, soon losing that spouse to death), and that many of the residents have crippling in one or both of their legs. The camera shows up various residents shuffling and limping around, but it should be noted that they all appear to be of advanced age, leading me to wonder if the building in question might not be specifically designated for senior citizens? We are further led down the "Fox Goblin" path via a visit to a guy who has encountered more than 30 people possessed by them. He claims he merely has to smell a person to know if they harbor a "Fox Goblin" within. He also says that possessed people have furry tails, so I presume you can also tell by pulling down their pants. On this note, the male host shares a group photo of himself and noted martial arts producer/director Ng See-Yuen with Ms. Ma Weiqing, an attractive young woman who claimed then - as now - to be a Fox Spirit. He ponders, "What is she? A beautiful fox goblin, or a horrible fox goblin?" In my opinion, she's definitely the former, but that does not preclude her also being the later.

The film then moves ahead to a discussion of claimed sightings of fairies, culminating in a visit to China's "Fairy Mountain" where there's a factory producing "Never Dying Pills," the taking of which can turn a person into a fairy. According to the subtitles, one man "became a fairy here secretly." It is here that we are introduced to a 103 year old fairy who tells us the he was able to father a child at the age of 82, thanks - in part - to his daily routine of sniffing the leaves of a certain tree.

I should note here that this documentary's two hosts/narrators/interviewers (one male, one female) are ever fawning to the subjects of their interviews. They maybe twice mildly question what we're seeing, but the only time they come right out and call someone a charlatan is in a fully staged segment with actors featuring a dark-skinned psychic who - seemingly Persian - wears a turban while he cons a gullible Chinese businessman.

Moving from China to Taiwan, the documentary gains a little more interest for fans of HK and Taiwanese film via its adding of actress Joyce Ngai (aka Ni Shu-Chun) as an occasional 3rd co-host. At the time of the making of this documentary, Ngai was best known for her prominent role in Ringo Lam's "Esprit D'amour," brief footage from which is shown as part of her introduction. Later, Ngai went on to co-star in Tsui Hark's "Chinese Feast" and Edward Yang's "Confucian Confusion."

Ngai takes the male host to a famous Taiwanese cafe, where she introduces him to the cafe's specialty, "Coffin Wood," a slice of thick white bread with a flap cut into the surface that can be pulled back to allow a potpie-ish stew to be ladled inside before again being closed. They then go to a temple honoring a dog that sacrificed its life by jumping into the mass grave of it's 17 fishermen masters. Triad members and prostitutes frequent this temple at night, seeking favor with the dog's spirit by lighting cigarettes to him, rather than incense, as the dog was known to enjoy cigarettes... especially foreign cigarettes.

We next visit Yang Chuan-kwang, the famed "Iron Man of Asia" Olympic decathlete. A former UCLA student, the subtitles seem to suggest that Yang abandoned a wife and child in the U.S. to return to Taiwan, where he became the first person to win an Olympic medal for China. He did this, he notes, with the assistance of a God, as was explained to him by this God some time later. It is also noted that Yang is an accomplished "exocist," having cured at least one woman of "ghost sickness" with the help of one of the three Chinese Gnomes who take turns inhabiting him. Back to the Olympic games, historical footage is shown of Yang winning a race against his former UCLA teammate, African-American Rafer Johnson. Take that U.S.A!

(Rafer Johnson, it ought to be noted, was later credited with tackling RFK assassin Sirhan Sirhan, along with journalist George Plimpton and football legend Rosey Grier).

A trip to a Taoist temple follows, where we meet the disciple of a 200-year-old master who invites us to watch as he creates a miracle of fire after first having a pile of thin sheets of paper placed on concrete under the sun. He then chants, dances, beats a gourd and rings a bell as we wait for the paper to begin to smolder and burn. Another man is introduced later that we witness surviving 32 minutes of brain death. We "know" that he is dead because two long strands of hair are placed over his nostrils and they do not move.

More interesting - and objectionable - is a session with Sister Seven, a granny who exorcizes a demon from a frightened, seemingly mentally handicapped child, by alternately - and incessantly - ringing a loud bell in his face AND beating him with her fists. Though initially non-verbal, after what seems like forever, the boy is given some money and coaxed into crying Mama and Papa.

Soon after, another rather sensational segment documents a woman receiving silicone breast implants, which we are told are believed to bring women good luck. The narrator wonders if the recipients family name might be Yip, like that of both Amy Yip and Veronica Yip, two of Hong Kong's famously ample-breasted stars.

Then there's a visit with a man whose superpower is the ability to tell - from looking at photos of Amy Yip's nose - whether her breasts are real or not? He says that they are not, yet the surgeon believes that they are. It is important to have an opinion on this matter.

Later we learn of the Feng Shui wars. Tales include that of a statue in Macao that controls the Feng Shui of a nearby bank tower, while the bank tower controls the Feng Shui of an adjacent casino. The solution was to construct a large casino outbuilding (a building that - at the time of the making of this documentary - had remained empty for years), serving the casino solely as a trap for the bad Feng Shui emanating from the money-grabbing bank. There's also a discussion of superstitious villagers rising up to object to the Feng Shui of an expansive modern urn garden being constructed near them. We learn from these segments that maggots (or mealworms) represent gamblers and foreigners are wrong to believe in that there is good health and fortune in storing the ashes of their loved ones inside Citibank lock boxes.

The filmmakers also take us to Hong Kong's famed "High Street Haunted House," a former mental asylum that was used by the Japanese during WWII for torture and execution. Boy-beating granny, Sister Seven, is brought along and begins crying upon looking at the peeling paint on a wall and seeing 6 or 7 ghosts: some naked; all victims of the Japanese. The camera turns toward a water damaged ceiling and the host asks the audience if THEY can see the ghosts that Granny Seven sees? "If you can't," he remarks with inadvertent humor, "then Congratulations! You are 100% normal." He goes on to say that If you CAN see the ghost's, then you will receive a gift in the lobby of the theatre that you are watching this film in. I'm guessing this was meant to get EVERYONE to exit claiming that they had seen ghosts.

One thing I've not yet mentioned is the reoccurring appearance onscreen of the film's Caucasian cinematographer, Mr. Laurie K. Gilbert. He is brought in front of the camera several times to witness various miracles and exhibitions, including this last one for which he is seated next to Joyce Ngai. Along with a group of several others, all of them blindfolded, the two participate in a seance meant to send the consciousness of the living to hell and then bring them back with "visions." We are told that famed writer SanMao once attended one of these seances and saw a vision of 23 published writings and found the 48th page of the last one to be blank. Years later, at the age of 48, following the release of her 23rd publication ("The Red Dust"), she committed suicide. This is presented as proof of the integrity of these seances, though what is not mentioned is that her suicide also took place after the back-to-back death of her husband and her loss of Taiwan's Best Original Screenplay award to the writer of "Song of the Exile"... a loss she reportedly took very poorly. Returning to the seance, a young boy has an on-again-off-again vision that is interpreted as his having successfully fertilized his mother's flower in hell, something that sounds dirty, but is supposed to help his mother overcome a chronic illness. A woman at the seance disappointingly announces that she only channelled "Deep Purple." OK, so the subtitles actually say "Dark Purple," but we already know not to trust the subtitles, do we not? Lastly, Joyce Ngai is momentarily paralyzed. She can neither move nor speak as cinematographer Gilbert looks on with both curiosity and concern (I actually expect to be speaking with him soon in order to learn more).

In the end, the male host gives a gift to a group of small children.. perhaps the same gift given to members of the theatre audience on their way out. HIs gift is a sutra. Singing this sutra, he and the children skip off into the woods hand-in-hand, though somehow he ends up alone on a beach at sundown. The End.