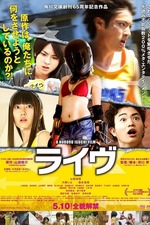 Though Noboru Iguchi has publicly exposed and exploited his fetishes beyond the breaking point, here he manages to reign them in just enough to make them actually serve a story, rather than “be” the story. Though Live certainly contains it’s share of panty shots and girls with crossbows, chainsaws and blades, he’s nicely fit these into a send-up of the Battle Royale/Hunger Games teen-survival genre, mixed with a touch of The Amazing Race.

The loved ones of several kids are kidnapped and threatened with torture and death, unless the teens compete with one another to complete a triathlon. To complete this race each of them must read a novel, within which they will find clues regarding where to go, and what to do next. Slow readers beware!

The Man in the Orange Jacket