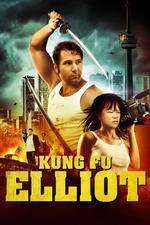 A fun documentary with a surprise twist ending. Elliot Scott is a young man with a mission: To become Canada’s Chuck Norris. Or Jackie Chan. With a couple of cheap homemade videos under his Black Belt, Scott is ready to step things up. Among other things, he will set himself on fire for his next film. But only if his girlfriend allows it, a woman who – sometimes heartbreakingly - supports him in every way.

Exaggerating his fame, while also promoting himself as a 7-time Karate champion with more than a few drops of Japanese blood, Scott successfully recruits a cast and crew, including a key cast member who -more dedicated than talented – believes that Scott will be his own ticket to Hollywood.

Taking a break from shooting to study acupuncture in China (on his girlfriends dime, of course… she wanting him to have something to fall back on if movie superstardom eludes him), Scott visits the Shaolin Temple and asks a young monk for a private demonstration. The monk asks to see what Scott is capable of first, and it quickly becomes clear that Scott may not be all that he claims… certainly not a Karate champion, nor – it is later revealed, any part Japanese. Worse, he proves himself selfish and duplicitous, and – in a surprise move – the filmmaker actually steps in and takes a stand before allowing the girlfriend to suffer one more indignity.