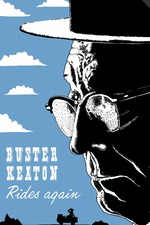 Average documentary, but any chance to spend time with Buster Keaton is a plus. He's smoking every opportunity he gets. Can you even imagine the stench of smoking all the time? Oh dear.

There's a particularly delightful part where the director of The Railrodder tells Buster it's too dangerous to take a map and fling it as a sail in Buster's face as his tiny handcar crosses the railway bridge in case Buster slips and falls to his death. Buster's response? Child's play. And he continues to sulk until the director caves in.

Of course, Buster survives the gag and we get to see it in the finished short. What gets him around 1-2 years later are the many (4? 5? I don't know) packs a day cigarette habit, dying of lung cancer a month after diagnosis, and without being aware he even had cancer, making the bit in the doc where wife Eleanor Keaton talks of chronic bronchitis, having antibiotics on hand all the time, and Buster's smoker's cough caught on camera the most chilling to watch.