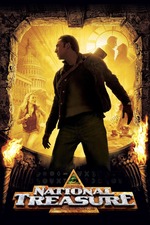 "Why can't they just say, 'go to this place, here's the treasure, spend it wisely'?"

I was that kid who wanted to be an archaeologist after first seeing the Indiana Jones trilogy, so it was a blast to see that premise done again with National Treasure when I was in college. Plus it has all that Freemasonry lore that I grew more interested in later on when I read those Dan Brown books. Bottom line: National Treasure is a silly fun ride, with plenty of interesting treasure-hunting puzzles, and action which just breezed by after I started rewatching it late one night.

- Cage steals the show of course with his character Benjamin Franklin Gates who actually steals the Declaration of Independence. But the movie does have a sneaky great cast with Sean Bean, Jon Voight, Harvey Keitel, and Christopher Plummer

- Diane Kruger works great as the fellow history buff who works to preserve the declaration, gets drug along for the ride, and ends up becoming the love interest. Plus I would say they develop some solid chemistry

- I thought Justin Bartha's timing was spot-on as the comic relief sidekick. That was a great moment when he gets that kid to help him get the letters for the code to avoid being seen

"It's invisible ... Oh! Right ... And that's where we lost the Department of Homeland Security."

- Sean Bean as the evil treasure hunter is heavy-handed, but at least that gives us our solid action moments. Especially the chase in the van right after the heist

- So how exactly did they find that boat frozen in the ice at the beginning .. well they are already there so I guess they did not have to explain that one 🤣

- So many great history elements are woven into the story. IDK how much of them are true, and I really don't care

- They just conveniently ditch those really cunning bad guys at the end, before discovering that huge kick-ass treasure that somehow remained hidden under a New York City church since the founding of the country

- By far the dumbest line in the movie - "It's a big blue-ish green man... with a strange-looking goatee... I'm guessing that's significant."

National Treasure is the kind of movie that is right up my alley, and if you can think of anymore like it I would love to hear some recommendations. I barely remember the second one, so I am looking forward to re-discovering it.