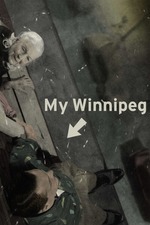 Nothing like an old fashion, artsy, and quirky stroll thru the stream of consciousness of filmmaker Guy Maddin thoughts of his hometown of Winnipeg Canada.

"Why are we so sleepy, why can't we just open out eyes. Is it the mystically paired river forks, the biomagnetic influence of our bison, the powerful northern lights. We don't know."

Well thank goodness I decided to break watching this up into two viewings, because I do not recommend going into this blindly expecting a good late night comedy. Instead Guy Maddin's dead pan tirade about Winnipeg, feels like a series of sensationalized thoughts about what bugs him about the city, in the black and white claustrophobic style of 'Eraserhead'.

The only reason I wanted to watch it in the first place was that crazy looking criterion cover with that strange looking horse in the water. Turns out that segment is pretty messed up and explains how these race horses got frozen into a lake with their heads sticking out. The narrator sounds an awful lot like Alec Bladwin but it is not unfortunately, but that great voice did a alot to keep me somewhat invested in the first half of the film. It just starts off so weird by him explaining that he feels trapped in this frozen wasteland with his crazy mother, we keep hearing about the fork rivers, and then zooming into a female crotch shot.

Watching the film feels like a gothic dream with the main points of the narration being echoed by on screen text. Some of the more amusing visuals are what look like a cartoon with these paper cutouts in front of a lit up background. Some of the other strange moments include these reenactments involving Maddin's mother and sister. Also there is something about the capitol building being a masonic structure and the streets named after prostitutes, and this information is followed up by a strange dialogue-less short film.

This is about where I took a break and resumed the next day, and thankfully the plot got much more coherent. The second half focuses a lot about sports and why he hates the new buildings being setup around town. Being in Canada he is very into hockey and explains his frustration about Winnipeg no longer being in the NHL. Also there is an interesting bit about a building containing three floors of swimming pools.

My Winnipeg is by far one of the strangest shorter films I have come into blindly in awhile. It can be amusing at times, but it is mostly just artsy especially in the first act. It is only around an hour and 20 minutes, so if you do start watching it I would recommend sticking it out to the end, because you may start enjoying it more after you settle into the film's strange style and humor.