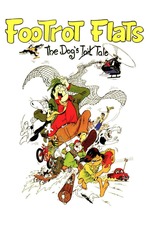 This is a collection of loosely connected stories that assume the audience is familiar with the characters. And indeed, that was probably true in the time and place it was released. My understanding is that this is based off a beloved New Zealand comic strip, and directed by the strip's creator, Murray Ball. So while this probably killed in 1980s New Zealand, I was left confused, or at least uninvested.

There's a real earthiness to Footrot Flats. The dog is more or less introduced when he jumps into a bag of freshly shorn sheep's wool and starts munching on the dingleberries. Lots of male animals (and at least one male rugby player) have their balls clearly drawn. All realistic, I suppose, but definitely not something I'm used to.

The animation was very good. I haven't ever read the original comics, but this keeps a hand-drawn feel while being pretty fluid to boot. I would guess fans of the source material were happy with this.

Ultimately, the cultural differences were too great for me to really enjoy this, but at least it was interesting.