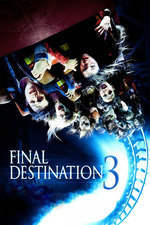 Theatrical Cut.
I think this might be my favourite Final Destination film.
It has some of the best kills (the tanning saloon, the GYM, the nail gun, the drive-thru, etc.), some of the best characters (Mary Elizabeth Winstead is easily the best lead in the entire franchise), probably the best ending (the fake-out is a brilliantly grueling piece of audience trolling) and the best new added element of all the sequels.
Every Final Destination sequel added a small new element to the formula.
FD2 added small premonitions before each death, FD3 added the photos that hint at the deaths, TFD-3D basically just took those two ideas and combined them and FD5 added the whole "if you kill someone then your dept with death might be squared".
Out of these I have always found the photos the most interesting and I love how they are used throughout the story.
It gives it a certain spice that makes it feel like it's more than just a simple repetition of the same old Final Destination formula.
It's also the most visually stunning and best directed film in the entire franchise.
I am also personally more terrified of rollercoasters than planes, NASCAR, bridges or trucks.
As someone whose afraid of heights I am obviously afraid of flying but I'll still board a plane if necessary yet you'll never find me anywhere near a rollercoaster.
Fuck that shit, I want to live.
The first film did build a stronger sense of dread in it's build up to the accident but this film's build up is still pretty intense and I think this may be my favourite accident sequence in the entire franchise.
All in all, when it comes to Final Destination James Wong knows his shit and this film IS the Shit.