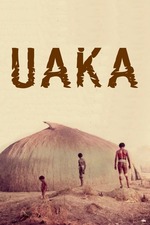 “The only explanations in the film are provided by the Indians whose voices are occasionally subtitled and carried over the image track. They describe the importance of quarup, a festival honoring Mavutsinim, a deity who enables the people of Xingu to be eternal. Early in the film, it is explained that the clouds draw figures and messages that help the people to dream of Mavutsinim.” — Catherine Russell, 1999

“Uaká/Sky leaves us with a sense of textures, colors, and rhythms, actions, gestures, and rituals that elude any one strategy for comprehension without ever suggesting that the events are incomprehensible or merely raw material for poetic expression”. — Bill Nichols, 1991

"Uaka tells the story of the indigenous people of the region of Xingu (the Kayamura), an almost unknown place between the Amazon River and Bolivia. Paula Gaitán infiltrates the community to create a film that is part ethnographic experiment, part documentary, but overall a film-poem, where the everyday activity of the tribe (confronted with the “occidental life”: rock music, technology, etc) is combined by the telling (via intertitles) of the legend of the hero Mavutsinim. Meliés is also part of the formula, reminding us of the telling of this fable, this story of magic and life."_José Sarmiento and Mónica Delgado,2016