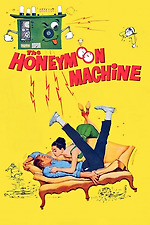 A hotshot Lieutenant and his civilian pal serve on the same ship during a NATO exercise at Venice. They decide to use the new military supercomputer to break the bank at the local casino, while at the same time the former starts flirting the daughter of an admiral.

Have you ever wondered why during his long and fruitful career Steve McQueen never tried his hand at comedy? If you did, then this incredibly obscure slapstick disaster will answer your question once and for all.
Based on a script that would have been rejected by Adam Sandler as too silly and broad, the only reason this movie doesn't get a (much) lower rating is because of the valiant efforts by the cast to milk the poor material for what is worth. In this effort they have very little help from director Richard Throrpe, whose work can be charitably called stagey and workmanlike. It doesn't help much either the fact that the characters are a bunch of caricatures that seem like rejects from a Keystone Cops flick.

One wouldn't believe that the King of Cool could ever embarrass himself onscreen, but that's exactly what happens here. While McQueen has the physicality and agility that this kind of comedy demands, he is simply atrocious when it comes to timing and delivery. Imagine what it'd look like if Chuck Norris tried to imitate Robin Williams and you're close enough. Jim Hutton is a bore and Dean Jagger is wasted. Paula Prentiss is by far the best as Hutton's bossy would-be fiancee and Brigid Bazlen is an oasis in the midst of this exercise in tedium.

To put it bluntly, "The Honeymoon Machine" is a distressing waste of talent and time. It's possibly worth a chuckle or two, but going through 90 minutes of dreck is too big a price to pay for this meager payoff. Unless you're a McQueen completist stay away from this dog.