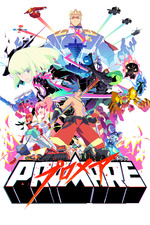 A question that's sort of plagued my mind for a while is "Why animation?". Why is it animation that's turned into my favourite storytelling medium? Promare answers that question for me, but it doesn't answer it in a way that can be put in words, and that's sort of the point. I used to consider books my favourite way of telling stories, and, yes, they are amazing and life changing, and I will never ever stop reading them and loving them, but words are perhaps the worst way humans have to convey emotion. They're so digital and discrete, they convey specific concepts and all the wiggle room in the world can't make words mean things that they don't mean. That's their purpose, to be sound-based signifiers of narrow ranges of meaning, to enable useful and quick transfer of information that allows humans to communicate with an ease that no other species can. All the intuition in the world won't let you specify "There's a dangerous animal in the third bush to the left" as easily as saying it would. But where words are discrete other mediums like animation and music are analogue, and continuous. There's only as many words as we've agreed upon as a species, but you could spend an eternity drawing images and making sounds and not even come close to a fraction of a fraction of what humans can experience. Animation is that concept taken to the extreme, pure creativity and expression vomited out of someone's mind and sent directly to the intuitive, illogical part of your brain that deals with emotion. In a way that I can't describe with words, only with images and sounds and feelings, animation bypasses all the logic in the world, it gets rid of the part of me that drove me to study maths and understand the world as a collection of structured systems and discrete concepts, it deactivates my word-brain and creates a direct, visceral connection between me and the passion of its creators, of the army-sized teams of people sweating blood and tears to make themselves understood. This whole love letter to animation I'm writing feels like an insult, words are inappropriate to describe what this medium achieves, because the only way to feel the power of animation is to watch animation.

Fucking watch this film, goddamn it.