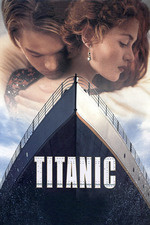 An epic of duality, bifurcated between day & night, life & death, female & male, romance & tragedy, and held together by love and close-ups. This is the film of a deep-sea explorer but also that of a matte painter at a time when the technique was dying out; just look at the sunsets! (Even James Cameron, however, felt this one was egregious). All those matte paintings, and yet still Cameron waited a week for the right sky for the actors to kiss under; when they found it, Winslet yelled, “Shoot! SHOOT NOW!”

So much of Titanic might seem corny but who in their right mind would give up the image of the train of Rose’s white dress flowing behind her through the bowels of the ship as she chases Jack and the boiler room glows orange? (The way DiCaprio, always quick to provide levity, yells “Don't mind us, you're doin’ a great job, keep up the good work!” leavens the corn without undermining the mood.)

Who else but a dictator would write, produce, direct, and edit their own epic? But where else but Hollywood would a tyrant subjugate the force of an industry to the whim and poetry of a moment? Which of course is all that the sinking of Titanic was, a moment in time, two hours, forty minutes to be exact, matched precisely by the length of the flashback within this film.

Critics are quick to (rightly) criticize contemporary filmmakers for a lazy reliance on close-ups but Titanic proves that the number of close-ups is not the problem so much as the size of the emotions they are fit to. Titanic is an answer to all of us who lament the demise of classical filmmaking, it is a return to the days when emotions were bigger than the screen itself and even a tyrannical dictator like Michael Curtiz could make a masterful melodrama.

For better or worse, Cameron is our Curtiz.